The Trilinos project uses a long-lived branch called 'develop' to conduct basic development. All Trilinos developers directly pull from and request pulls to the shared github 'develop' branch. Then, the 'master' branch is updated from the 'develop' branch when it passes a specific set of builds for a specific set of packages (the set of packages and builds will evolve over time). This is depicted in the below figure: 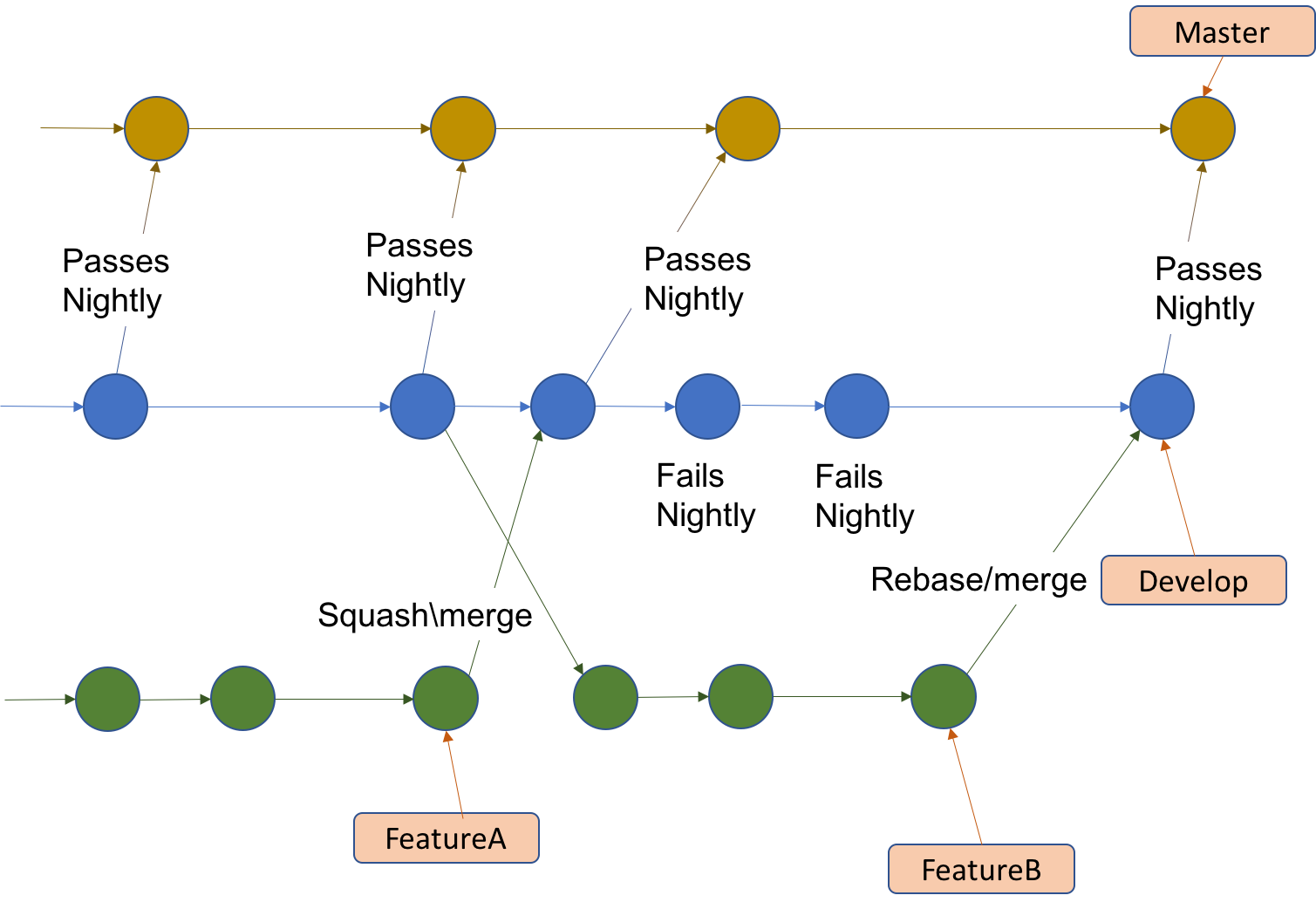 (NOTE: The "bug-fix" workflow elements shown in the above figure are not described below but are described in great detail in the above reference. If things go well, then these "bug fix" commits should almost never be needed. But in the rare cases these "bug-fix" commits or revert commits are needed/desired, then more experienced Trilinos git developers can help make those changes.)

Transitioning to a feature-branch/develop/master workflow

For developers accustomed to the previous single branch Trilinos development model (the Simple Centralized Workflow), the transition to the feature-branch/develop/master workflow is not complicated. In essence, you make changes to the feature branch, rather than the develop or master branch. A few extra details, and commands for doing this are below. These commands will be needed every time the Trilinos repository is cloned.

If the local 'develop' tracking branch was already created (can be seen by running git branch), then just check out that branch using:

Once on the local 'develop' branch which is tracking the remote 'origin/develop' branch, simply create a local branch for your new development. changes from develop or your local feature branch can be freely pushed to your fork on github to share with other developers or to simply preserve the code in case of local failuure. When all is ready to integrate simply issue a pull request on GitHub from your feature branch to trilinos:develop. See feature branch workflow.

NOTE: The checkin-test-sems.sh script can be used on the 'develop' branch to locally test modifications.

The below process applies only to situations where a Trilinos developer has made changes to the local git repo's 'master' or 'develop' branch and needs to transfer the changes to their local feature branch, where they can be pushed to their github fork. This will be common only during the initial transition to the feature-branch workflow.

Before getting started, Trilinos developers can optionally set up their local account to use the git usability scripts git-prompt.sh and git-completion.bash and enable git rerere as described here. The shell scripts will make it obvious what local branch a developer is on and git rerere will help with the rebasing and merging commands required to transition local commits.

The below process assumes:

If you are not already on the local 'develop' branch, this step is described above.

Next, pull to update 'develop'.

And set up a feature branch

At this point, the commits merged from the local 'master' branch should be tested prior to pushing to the remote github 'develop' branch. This can all be done using the checkin-test.py script. The necessary manual commands are:

NOTE: If git rerere is enabled, then any merge conflicts that have already been resolved will be resolved automatically on the final rebase before the final push.